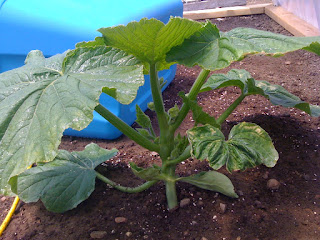 The picture to the right is the 1236 Harp. It has an interesting cross being 998 Pukos x 1385 Jutrus. The pollinator for this plant was the 1385 Jutrus that grew the world record 1,725 pound pumpkin. The pollinator for the 1385 Jutrus was the 998 Pukos that grew the 1,689 pound world record. The pollinator for the 998 Pukos was the 1446 Eaton that grew the 1,446 pound world record. Are you beginning to see a pattern? I'm just hoping for a nice, big giant. This plant so far has been completely resilient to sun, clouds, hot or cold. It almost always looks the same. It hasn't been a super fast grower but it hasn't been slow. Christy said that the first month her world record pumpkin grew it was a relatively slow grower. She hoped it would get to 1,100 pounds by the end of the season. Apparently it found another gear to get to 1,725 pounds. I'm hoping this plant carries those genes.
Posted by Jamie at 5/17/2010 03:26:00 PM