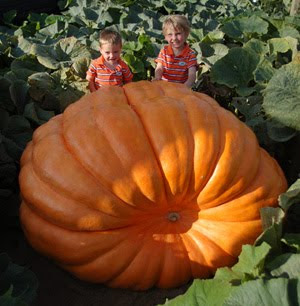 The much anticipated 6th Annual Rocky Mountain Giant Vegetable Growers Pumpkin Weigh-off will be held on Saturday, September 24th. Last year, more than 3,000 people attended this event that featured 1,500+ pound pumpkins measuring more than 14 feet in circumference.
“We saw some amazing pumpkins last year and look to see some giants again this year.” said Gary 'The Wiz' Grande, President and CEO of the Rocky Mountain Giant Vegetable Growers (RMGVG). “It is always fun to see the children’s faces the first time they see the pumpkins. They are something straight out of a fairy tale and we might see a new state record this year." The current Colorado record was set by Barry Todd of Littleton last year at a whopping 1,308 pounds.
“The weigh-off is a celebration of our growers’ hard work and is a fun way to kick-off the fall season,” said Jamie Johnson, Vice President of the RMGVG who was featured on NBC’s The Marriage Ref this summer with his pumpkin. “It is a great event with food, straw mazes for the kids, music, face painting, haunted house, audience voting and of course, some really amazing giant pumpkins.”
The record for the world’s largest pumpkin was 460 pounds until 1981, when Howard Dill, a grower in Nova Scotia, came up with one that was close to 500 pounds. He patented the seed, and growers around the world jumped to buy Dill’s Atlantic Giant. As they crossed and re-crossed varieties, the pumpkins grew ever larger; by 1994, the symbol of Halloween had passed the 1,000-pound mark. The world record pumpkin was grown last year by Chris Stevens of Wisconsin and weighed an amazing 1,810 pounds.
The event will take place at Jared’s Nursery in Littleton, 10500 W. Bowles Avenue, starting at 10 a.m. with the junior division, followed by the giant pumpkins at 11 a.m. Admission is free to the public.
For more information about the RMGVG weigh-off or to get more information on how to grow giant pumpkins or vegetables post a comment below
To watch a short video of last year’s RMGVG pumpkin weigh-off event visit http://www.pumpkinlink.com/pumpkin-video.html
Posted by Jamie at 9/15/2011 08:42:00 AM

Dang, I'll be out of down and will miss the pumpkin weigh off this year! It was a lot of fun last year. I was really looking forward to seeing that huge pumpkin of yours in person! Are you going to take it to the Nick's garden center giant pumpkin festival?

I will be only taking my pumpkin to Jared's. Too much work to take it anywhere else.

Haha, I don't blame you!