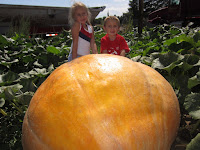 My son and I took a small pumpkin from the 868 pumpkin plant that popped up sometime after my main pumpkin ("Jerry") went down to rot to the weigh-off at Nick's Nursery yesterday. The pumpkin was probably about 30 days old and pretty good sized for it's age. I always wondered if Jerry was going to go heavy to the charts and I figured this was the best way to find out since it never made it to the scale. Jerry thumped like he was heavy so I took this little pumpkin to give me a ball park idea of what this 868 plant could produce.
To my surprise the little pumpkin went 15% heavy (aka abnormally heavy) to the charts! Now I really wish that Jerry would have had a chance to go to the scales to see what that pumpkin could have done. From the start it was the fastest growing pumpkin I ever had but for some reason it slowed down at the beginning of August and by the third week it rotted out. I wonder now if there wasn't something more than the one spot of rot that I found because that pumpkin completely rotted out very quickly.
About a month ago I pollinated the 868 plant with a clone plant that came from the same plant that produced a 1,725 pound pumpkin. On paper that is a very interesting cross. The genealogy of this pumpkin that I cut off the vine yesterday is that it has three generations of 1161 Rodonis in it. The first Rodonis weighed 1,579 pounds. The second Rodonis weighed 868 pounds. The third Rodonis weighed 1,725 pounds. Genetics wise it is 87% 1161 Rodonis which in my book isn't a bad thing. Since the last pumpkin went 15% heavy who knows what this pumpkin's seeds might produce.
Posted by Jamie at 10/09/2011 07:55:00 PM

Oh my good, it is so big.. How much time does it growing?

The pumpkin was about 70 days old in the picture. Usually they stop growing at about 90-95 days but this one was lost early due to rot.