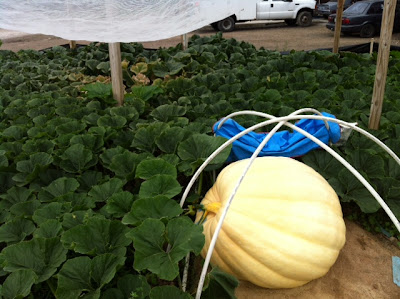 Today was the annual Rocky Mountain Giant Vegetable Growers meeting.  Normally it is a patch tour but this time we just did a gathering.  Not a lot of known big pumpkins in Colorado this year.  Disease and heat has taken a lot out of the plants. Thanks to the Wiz for the time and effort he puts in every years for the club.

To the right is a picture of my pumpkin.  Just over 400 pounds.  The plant is probably about 600 square feet right now.    All of the vines are terminated except for the main vine and six side vines.  I'll probably let it grow another 150 square feet and then I'll terminate all of the vines except for the main.The pumpkin is starting to show more orange lately so it might be a light orange by the time I take it off the vine.

48 days until the Jared's Nursery weigh-off and 55 days until the weigh-off at Nick's Nursery.  That means the pumpkin is 40-45% through its growing.  You never know what a pumpkin will do but if the pumpkin's growing rate doesn't drop I would estimate that it will end up just under what it weighed last year.
Posted by Jamie at 8/11/2012 03:19:00 PM