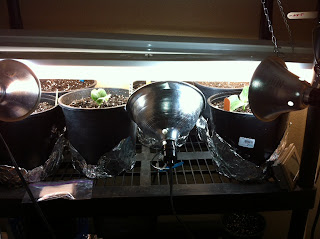 Thanks for sharng your setup for your "grow room" I'm looking into how I can do something similar when we get into the growing season here in New Zealand in October.

Your welcome. There are definitely more elaborate (i.e. expensive) ways to do it, but this way seems to work just fine.

received your seeds today thanks , already planted up and ready to grow