At a weigh-off this fall I met a very nice gentleman by the name of Scott that works for a company by the name of EcoScraps.  I had actually heard of EcoScraps previously because it was started by a couple of guys from my alma mater and they have received a lot of press.  There compost is different than most because it is mostly vegetable and fruit based.  What they are doing is getting left over product from grocery stores and the like and then composting it.  The final product makes a very nice, dark compost that that isn't animal derived.  When they get the waste product they actually will blend the different fruits and vegetables together so that they can get a more balanced nutrient profile in the compost.  You'll notice that there is much less in the way of wood chips in the compost than what even the "premium" compost blends have that you get at the garden centers.  That is a good thing.  Those wood chips will rob your soil of nitrogen and most bagged compost products have way to much wood in them.  This stuff actually looks like the compost that you make in your own pile. 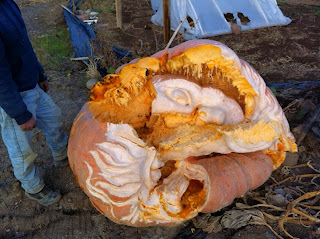 Today I tilled the pumpkin patch in preparation for winter.  I tilled in 4 lbs kelp, 20 lbs gypsum, 4 lbs Yum Yum mix, 10 lbs humic acid, 4lbs elemental sulfur, 100 lbs alfalfa, 2 bags of leaves, 2 yards compost, 10 lbs biochar and 1,200lbs of Stanley.  You hate see a great pumpkin end it like this, but hopefully it will produce something even better next year.  After tilling everything in to the soil I then planted a cover crop in the area where the stumps will be next year.

This is the first year I've tried biochar so I used a fairly small amount.  Biochar is an emerging area of agricultural study and there is some descent research done with it but it isn't extensive.  The idea is that the biochar (very similar to but not the same as charcoal) has the ability to hold a lot of nutrients and share those nutrients with the plant.  So it isn't a fertilizer but a way to help keep the fertilizer from leaching out of the ground.  Microorganisms also like the biochar because it is very porous and so it is a great way to build biology in the patch.  I know of one grower that used it last year and he had a very nice pumpkin.

Google; "Biochar Gourds of Damocles" for a view of record Calabash gourds.

Over the last several years I have been briefing both secretary Vilsack & Jackson on the developments of the Biochar platform for biofuels, soils and health. Sec. Vilsack sent me a letter of thanks, a real snail mail letter, four paragraphs, reiterating each of my points.

In a nutshell, this thermal conversion technology provides a tool to manage energy and agriculture while simultaneously dealing with ecological cost, inefficiency and waste.