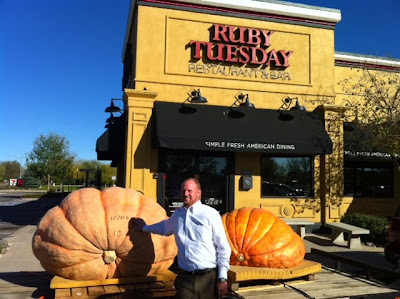 After the weigh-off today about a dozen growers in the club went to Ruby Tuesday for lunch.  My pumpkins were in the parking lot and probably 35+ people stopped by to take pictures of the pumpkins who were just passing by in the space of an hour. After a while the restaurant manager came by and said if I would park the pumpkins out in front of the restaurant he would give me a free dessert.  He wanted to take pictures for some new pumpkin deserts they had coming out and include the picture in their newsletter.  Their pumpkin cheesecake by the way is excellent.  I may stop at many of my favorite restaurants this week and try some of their desserts on their menus.  ;-)

I had been debating selling one of my two pumpkins for a while now.  All I ask is that I can get the seeds out of the pumpkin and I can deliver the pumpkin this week.   A forklift or a mechanical way to lift the pumpkin is required on delivery.  With delivery the pumpkin would be $750.  It feels like selling a little of my soul, but I'd like as many people to enjoy it as possible.   The pumpkin is an amazing crowd pleaser and stops people in their tracks immediately.
Posted by Jamie at 10/05/2013 05:08:00 PM