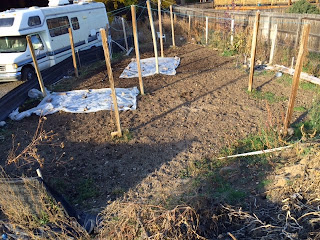 I'm going to reconfigure my pumpkin patch next year.  For the last five years I've had my two pumpkin run side by side each running east and west.  That worked well for the southern plant but the north plant has very limited space and if my first pollination didn't take I would have to curve the main vine north to set the next pumpkin and space was very limited for that.

I'm now going to keep the southern plant like it has been but the north plant I'm now going to have it run north.  I'll expand the patch a little that direction which will give me almost 45 more square feet of growing area for that plant and I can even let the main vine go farther if it wants to run so it can grow all season.

In the picture above where you see the plastic is where my two planting areas will be.  My cover crop, in this warm fall, hasn't taken off like I would have expected it to.  The nights have been in the forties but the day time highs have been in the high 70s for the last two weeks since I planted so I would expect more green by now.  I wasn't going to send in a soil sample, but I needed to send in one for my garden so I decided I should send in one for the patch as well just to make sure something isn't out of whack.
Posted by Jamie at 10/26/2014 07:04:00 PM