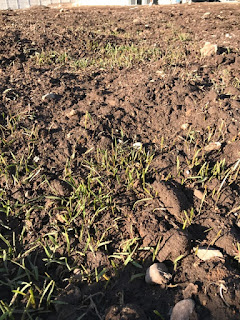 Here in Midway, UT we've had a fairly tough winter.  I'm told by the "old-timers" that this is the most snow we've seen in the last 10 years.  Seems like it just kept coming.   I've seen the soil twice in the pumpkin patch twice this year and most of the time it has been under more than a foot of snow and at one time almost 3 feet.   Snowpack in the Wasatch range is at about 160% right now.

The snow finally melted out of the patch today and from a distance I could see something that kind of surprised me. About 3 weeks before the ground froze I put in a cover crop in patch #1 and it got nicely established, but patch #2 didn't get a cover crop until about 5 days before it froze.   Today I noticed this nice green grass popping up all over the patch.   Germination rate looks to be adequate enough to cover the patch nicely by the time I till the soil in April.  I would of thought that since that seed had been buried under snow for the last three months it wouldn't had started to grow until we got at least a week of consistently warm weather, but this winter rye doesn't seem to care much about temperatures and snow.

I really like winter rye for this reason.  It is super hardy and it is easy to incorporate.  You can pull it out by your hand if you wanted to so it is easy to control.  It doesn't have the bio mass of some cover crops, but it works very nicely when you can't get a cover crop in early in the fall or when you want to get a cover crop going in the spring. Also a good way to get the myco going in the soil early in the season.

Hoping you have a great growing season! We look forward to following your progress in your new area. You never know, this may be a record breaking year for you!