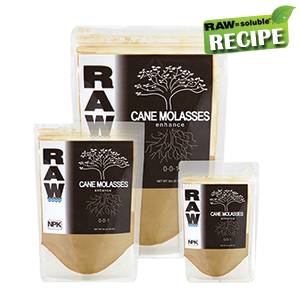 I once watched an interesting video that talked about how adding cane molasses later in the season to the soil can help boost yield by keeping the microbes in the soil going. Pumpkin plants and beneficial bacteria and fungi have a symbiotic relationship.  I think most competitive giant pumpkin growers see the value in putting down myco in the soil to increase root mass, but maybe more importantly have the myco bring back nutrients and water to the plant.   The way this symbiotic relationship works is the microbes feed the roots and the plant roots give back sugars to the microbes.

The problem becomes that later in the season, when the pumpkin is putting on pounds, the plant can start to get stingy giving back the sugars to the microbes.  As a result, some of the microbes may die off or become less productive.  This is because the plant has most of what it needs and wants to feed the pumpkin.  In order to keep those microbes growing and working for the plant, a good strategy is to put down some cane molasses on the soil.  RAW Cane Molasses will feed the microbes and help build beneficial bacteria in the soil.  It is also very easy to use and mix.

Today I put down NPK Microbes Bloom & Grow formulas with a some Azos and RAW Cane Molasses.  I sprayed it under the canopy onto the soil and then took a watering pail and poured some around the stump areas of the plants.  After that I watered it all in by running the sprinklers for 10 minutes.
Posted by Jamie at 8/05/2017 08:53:00 AM