Wow! UGPG have Some World Record Stuff Going On 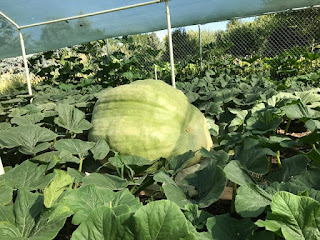 I expected to see some very big pumpkins on Saturday at the UGPG patch tour, but was blown away by what I saw.   All of the patches looked great, but there were two obvious standouts on the tour.  The first was Gordon Tanner's giant squash.  Not sure what the growth rate is currently on it, but it was in the ballpark for becoming a new world record if it can keep growing like it has in the past.  Taped over 1,100 pounds and it probably was the biggest greenie I've ever seen and it still has over a month to grow.  I know this is already bigger than any pumpkin Gordon has ever grown, so congrats to him already.  If he can get it to the scale, I'm sure he has a Utah record breaker in his patch. 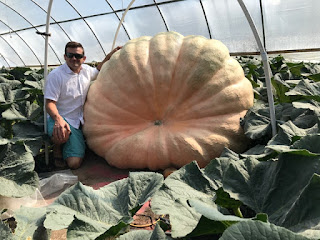 The next stop was at Matt McKonkie's patch.  He didn't grow last year and obviously has put two season's worth of energy into this year's patch.   His pumpkin, grown on a Wallace seed, isn't quite the biggest pumpkin I've ever seen yet, but within 100 pounds of it and still has 30+ days to grow and still putting on 20 pounds a day.   At 78 days old and an amazing 1,900+ pounds, it will be interesting to see if the pumpkin still has enough in it to grow all the way to the Thanksgiving Point way off.  The plant looks healthy and happy.   Pollinated the very end of May, the fruit would be 116 days old by the time he takes it off the vine.  I wouldn't be surprised if he could get growth on it  for 110 days.  116 days might be pushing it.

So for fun, some quick "what if" calculations.  Let's say the pumpkin will grow for 110 days.  And with the growth curve, the pumpkin can put on 7 pounds a day.  I don't want to jinks anyone, but that would put Matt's pumpkin in the World Record range at 2,670ish pounds, if the pumpkin went to chart.   Thanksgiving Point should be interesting.

This morning I sprayed nitrogen and potassium on the patch.  Wanted to kick my little pumpkin after seeing Matt's.  Lol
Posted by Jamie at 8/14/2017 09:29:00 AM