A Fun Few Days & The End of Growing, But Not the Season 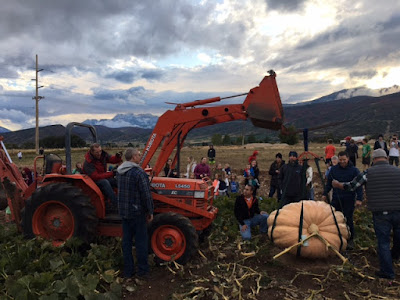 On Friday we had our 10th Annual Giant Pumpkin party at the house.  The first pumpkin party was started out of necessity.  My first season I had a 755 pound pumpkin and I needed muscle power to lift the pumpkin.  I invited friends and family to a "party" so I could get the pumpkin on a trailer to take to the weigh-off and it became an annual event.

This years pumpkin party I would guess we had 75 people or more in attendance.   It is always hard to tell as people come and god.  I'm a terrible host because I'm focused on taking care of the pumpkin and there is always a lot to do so I feel guilty that I don't get to spend more time with everyone.  This year it was particularly fun because almost nobody had seen a giant pumpkin before and there is a certain wonder when you see a 900+ pound pumpkin for the first time.

The next day I drove the pumpkin to the weigh-off. Also something that is a lot of fun as people see the pumpkin and either their jaw drops or they smile, wave and take pictures. 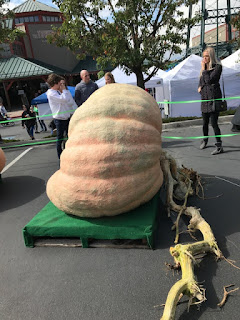 A number of great pumpkins at the weigh-off at Thanksgiving Point.  But one stole the show.  Matt McConkie's behemoth estimated at over 2,000 pounds, but looked particularly large because it was somewhat of a wheel and was extremely tall (look at the fire hose vines on that thing!). Pumpkins always look bigger when they are tall.

As I sized up the pumpkins at the event, an eyeball estimate had me in 5th or 6th place.  The truth only happens when the pumpkins are on the scale and I kind of hoped my pumpkin would go heavy because the pumpkin my seed came from was 19% heavy, so I was hoping I had some of mama in my pumpkin.

I had been asked to be a judge for the weigh-off.  So we measure and judged all of the pumpkins to make sure there were no pumpkins with defects that would eliminate them from competition.  Fortunately only one pumpkin had to be disqualified and the grower knew about it beforehand and expected it.

The Utah Giant Pumpkin Grower club puts on a first class weigh-off.  Major flag ceremony at the beginning and the like are just part of the show.  I've been to big weigh-offs from coast to coast and it this one is a very good one here

Had some interesting conversations with different growers about growing techniques during the weigh-off.  In particular had an interesting conversation with Ralph.  I think he is a grower that is under the radar.  Has a big pumpkin on the vine right now that is going to another state's weigh-off, but he has interesting ideas around the environmental issues we both face.  Our challenges are somewhat different than growers in the Salt Lake valley, so I think we can help each other grow bigger.  I suspect that Ralph is going to have some very big pumpkins in about two years. 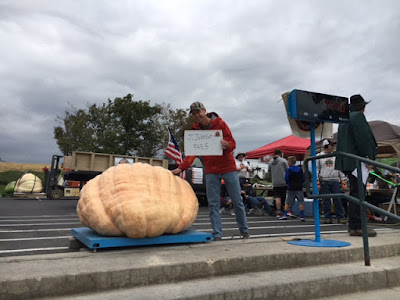 After three hours and a lot of pumpkins, my pumpkin finally hit the scale near the end of the event.  I had my pumpkin estimated at 947.  The official measurement, which I wasn't part of, had it at something like 939.  I hoped it could go 6% heave to get it to 1,000 pounds, but no luck.  It ended up at 943 pounds.  I wasn't disappointed however.  Earlier in the season I wasn't sure it would go much more than 700 pounds.   The 747 Johnson pumpkin named Jumbo, was the little engine that could.  It never grew fast.  Only hit 25 pounds per day at its peak, but it grew long.   Much longer than any pumpkin I've had in the past.  Was still growing at 109 days old when I cut it from the vine.  My plan right is to grow that seed again next year.  I think it has more to give and there is only one other seed I like better right now and crossing the 747 into it would be very interesting.  This is the 2nd biggest pumpkin I've ever grown.  Far behind my best at 1,220 pounds, but in some ways this one is special because between heavy winds, cold nights, bad powdery mildew, poor watering system and deer, this pumpkin did better than it should have.

The cap stone of the day was Matt's pumpkin going to the scale.  After a moving speech by Matt, they revealed the weight.  A somewhat disappointing 1,974 pounds.   I'm sure Matt wanted a one-ton pumpkin, but I'm also sure a new Utah state record and personal best wasn't disappointing.

In the end, I ended up in 4th place and was only 49 pounds from second place.  Most of the pumpkins went light and since mine went to the chart I leaped over some larger pumpkins.  On the way home, with the pumpkin in tow, I had a humbling experience however.   I stopped at a light and the guy in the cart next to me asked if I got first place?  I said 4th.  He then asked how far from first my pumpkin was.  It hit me when I said, "One THOUSAND pounds" that I have a long way to go next year.  The good news is that I have stuff in the works for next year that I think can help close that gap.  More on that to come in posts over the winter. 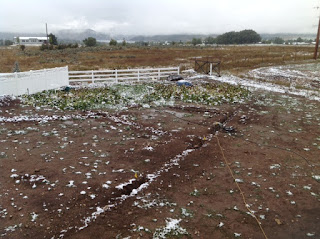 Today I was exhausted.  After getting a nice ovation in church when they announced my pumpkins weight (a bit of a surprise and  appreciated), I went home and took a nap.

Today we got snow, so the hope of any more weight on the 2nd pumpkin (Cujoe) went away, so growing pumpkins is done for the year.  I've got it under a tarp and blankets so the goal now will be to keep it cool and dry until the weigh-off in two weeks at Hee Haw Farms.  I haven't measure Cujoe in about two weeks I think.  It was only 20 or so pounds behind Jumbo at the time, was growing slow but gaining a little on Jumbo.  I expect this pumpkin to go light, so I would be a little surprised if it got to 900lbs, but anything is possible. Pictures of the "satellite dish" pumpkin to come.

Good job Jamie.
It's been cool to read about all of the effort and knowledge you've shared.
I'll use some of your tips, across the river in Heber next year.
Good luck next year,
Shawn

Hey Shawn. Thanks. Drop me an email if you would at jamie at pixoinc.com.