Updates from the Pumpkin Patch

The last week has flown by and I've been real busy with the greenhouse.  About 1/3 of the way done with its setup.  I hope and plan on having it done next week.

Today was selection day.  Kind of like ripping a child out of the ground.  Always have to think what opportunity is lost when you take out the 2nd plant in a hoop house.  But it has to be done.  I like to look at the characteristics of the plants before making a selection.  It isn't always the biggest plant that is kept.  Today that was true.  For the 1974 hoop house, I went with the plant that was maybe a foot shorter in length.   The two plants for the most part were duplicates of each other, but the one I kept had a much thicker main vine.  I remember Pap once say, "Can't grow a giant pumpkin if the pipe to the pumpkin is a small one.  I've seen plants with massive vines, but small pumpkins however.

For the 2145 hoop house, it was an easy pick.  You don't toss out a plant that is from a seed the grew the world record pumpkin and north American record.  Not only that, it was the obvious choice.  The 1974 plant that was in that hoop house was the runt, but it started wiring up in the last week and I could tell that if it had more time it probably would have made a nice plant.  But we'll never know now.

Here are pics from today.  The first is the 1974 plant.  Like I mentioned previously, Matt said his plant was very aggressive.  This plant doesn't seem to be an exception.  King of the patch right now.  Big leaves, thick vines and a fast grower. 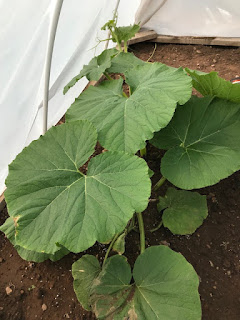 The 2145 plant below has also been a nice looking plant.  The other day I saw roots popping out of the ground around it.   I've only had one other plant do that and it grew my personal best.   So far, I'm very pleased with both plants.   I think they will both be out of the hoop houses next week.  That makes me a little nervous.  Tough springs here in Midway, UT.  Lots and lots of wind with cool to cold temps from time to time.  I've bought some wind cloth and will put that on the windy side of the 1974 plant.  It should help.  Hopefully the 2145 plant will have the greenhouse over it soon, so we can protect it as well. 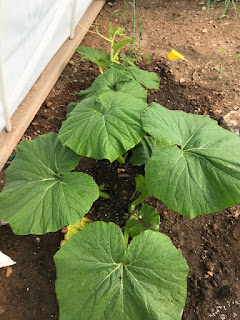 Today I gave the plants some compost tea with liquid fish, alfalfa, pinch of blood meal, pinch of 6-2-0, actinovate, friendly bacteria, yucca and a tablespoon of liquid seaweed.
Posted by Jamie at 5/18/2018 04:57:00 PM