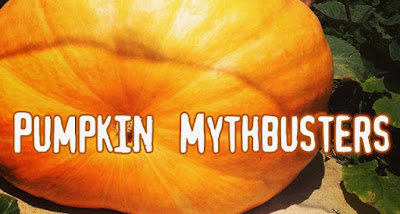 Inspired by the popular Myth Buster's TV show, my plan, starting Sunday, is to do a series of posts about commonly held giant pumpkin growing technique myths and debunking those that aren't true, based on scientific literature and actual testing.   Too often there are commonly held ideas in gardening and giant pumpkin growing that get passed on from grower to grower that just aren't true or there is no proof of their truth.  The end result is that we end up spending a lot of time or money doing things that are either are not overly helpful, are overly time consuming or we are spending a lot of money for something that has little value.

For example, I've heard it said by more than one grower/gardener that you shouldn't water during the heat of the day, because the water droplets act as magnifying glass and on a sunny day your leaves will get burnt.  Most things like this have a common sense element to it, where if you think about it, a water droplet on a leaf does have a shape of a magnify glass and it could focus the sun's rays and as a result you get a burnt leaf.  That makes sense, right?   The other side of it is have you heard of forests going up in flames after a rain storm followed by sun?   Obviously water droplets aren't causing rain forests around the world.   So the trick is to just not go by common sense and try to get at what testing and science can tell us as to what works and what doesn't.

Now does science know everything?  Obviously not.  You have to look at the source, how the testing was done, what the scientists/tests goals are in the experiment, what the sample size was and what type of crop the scientists were using in their testing, because not all plants are Atlantic Giant pumpkins and each plant is a little different.  But good science is pretty objective and should get us closer to the truth and as a result get us a bigger pumpkin.

Some of the things I'll be posting were a real surprise to me.  A few I even read from well respected "growing personalities" and heavy hitters and I believed were true.  But the science and testing is saying otherwise.  So stay tuned next week for the start of the giant pumpkin growing myth busters and maybe like me you might learn something new too.
Posted by Jamie at 4/04/2019 03:37:00 PM

Thank you, Jamie! I appreciate it!