Latest Pictures from the Patch 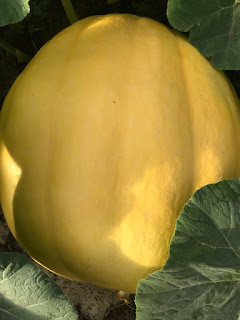 I've been a little slack on the posts lately.   Pictured here is the 2005 pumpkin (AKA Uncle Sam).   This pumpkin I think is shaping up to have the 2005 ribbing and the 2416 coloring, which if it is true, could be ideal in terms of looks.  I've never had a better looking plant in mid-July than this one.   Great color, the leaves are all in great shape and the plant looks healthy.  The root system also appears to be impressive.  I see roots all over the place.

Growth hasn''t seemed to be matching the beautiful plant so I sent in a tissue test to see what was going on.  In my spring soil analysis potassium and phosphorous were very night and nitrogen was low.  When doing my EC testing the numbers consistently came in under the ideal, so the natural assumption, since sandy soil leaches nitrogen easily, is that nitrogen would be what was missing.  So I've consistently been adding nitrogen throughout the season in spoon feeding amounts.  Only in the last 1 1/2 weeks have I seen the plant react in such a way with bigger leaves and darker color to indicate that the nitrogen was making much of an impact.    But in the last 1 1/2 leaves the leaves did go a bit jungley.  Gotten noticeably taller, darker and with bigger leaves.  But as you can see the leaves don't have that overly bloated, blue color when the nitrogen has gotten to be too much. 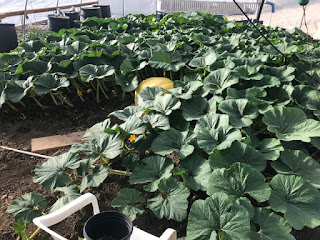 I'm wondering if the nitrogen has been the inhibiting factor to this point, because of too much.  It will be interesting to see if as things come more into balance if the growth curve will improve.
Posted by Jamie at 7/17/2019 08:09:00 PM

Looks like your plants are doing really well. Hope you’ve had better weather then we have up here. July was cool and some hail storms didn’t help me any. I got one that’s taking off and fingers crossed it continues as it might be a real good one for me. I think we are finally settling into summer as we are forecasted to be low 90 this week.