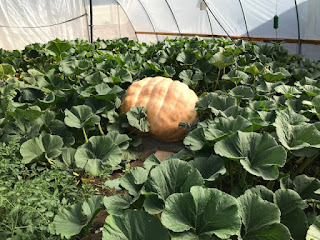 Goodness.  I can't believe it has been this long since my last post.  I'll try to be more diligent over the next month, but it is going to be a busy one, so I can't make any promises.  Where to start...

I pulled the 2255 plant in July because I wanted to spend time with my son, helping him with his plant.  That poor 2255 plant had been through a lot.  The wind and frost had done a number on it and it being outdoors, compared to the 2005 plant were night and day.

The 2005 plant was disappointing in July.   The salad looked beautiful and I had a root system on that plant that I hadn't seen since my 1421 plant that grew my personal best, but that pumpkin just didn't seem to want to take off.  It was way behind and that was discouraging.  I hadn't measured it much, so I don't know what it peaked at for growth rate, but the eyeball test made it fairly obvious.   However, I kept plugging away at that plant and didn't give up on it.

The very beginning of August, my family and I went on vacation to Lake Powell for a week.  I got a tissue test on that plant a week or so before and it showed that I was mildly deficient for potassium and phosphorous and through the roof to high on nitrogen.  All of those numbers caught me by surprise.  In the spring my soil test showed I was very low in nitrogen and high in potassium and phosphorous.  During the season I was doing EC testing regularly and it most always showed I was at about half of what I should be.  Since my numbers were low in the spring for nitrogen I gave a little extra nitrogen each time, because I figured that must be the low number and I didn't see overly fast growth for the vines and big dark leaves, so I knew nitrogen had to be the missing piece.

Then, really in one day, the leaves just took off.  Normal leaves started getting really tall and I started getting sucker vines all over the place.  As a matter-o-fact I remember distinctly a week before that day noticing that the leaves didn't show any sign of there being too much nitrogen and even considered doing more nitrogen because I thought maybe I was still under doing it.  I asked the soil scientist why the flip-flop in numbers.  His answer was that the plant was using a lot of potassium and phosphorous and obviously I was putting down too much nitrogen.  So I haven't put down almost any nitrogen since and have been doing a fair amount of potassium and some phosphorous.

I started to notice some changes just before going to Powell in the size of the pumpkin, but after Lake Powell it was a little more obvious.  That pumpkin was growing fairly well.   I don't know for sure, but my guess is the pumpkin peaked in the low 30s per day, which isn't great, but it has just kind of kept trucking since.  Right now it is still doing 20 pounds per day with no signs so far of slowing down.  Weather has stayed consistently warm and the forecast looks like more of the same.  That might help keep it going.  Nighttime lows starting the beginning of August started a dip however.  40s in the night right now, with some nights as low as 43.

I have a theory as to why this pumpkin has done what it has done.  Some might be genetics.  Some pumpkins are just long growers.  Will never hit 50lbs per day, but they just keep chugging along to get their weight.   I also think that maybe I was a little deficient in potassium when the pumpkin started hitting its peak growth time and was ringing the dinner bell but couldn't quite get all that it wanted.  Lastly, I think it was our spring weather.  It was horrible and I think size wise it was a bit behind, but also maybe maturity wise.  Typically a pumpkin starts taking off around day 28.  This one didn't.  Maybe that rapid growth phase was delayed a little by the weather.

Patch tour came to my house on Saturday.  Nice of growers to come up all the way to Midway to check out the patch.  I was told I got first prize for views.  Patch tours are always fun and a great learning experience.  From what I gather, there are four pumpkins that will be neck and neck going into the end of September if everyone was giving straight numbers.  Sadiq I would guess would have the greatest advantage.  His 1,200 square foot plant with fairly healthy leaves should be able to power him over the next 30 days.  Joe has the healthiest looking plant, but the plant is only 400 square feet, so he'll need those leaves to push through to the end, but he has a great looking pumpkin.  Andrew is the wild card.  Just know the numbers that he shared and he wasn't on the tour, so I can't say where he was at currently.  My advantage is that my numbers were the biggest of everyone, but everyone is so close in size it doesn't really matter because I assume I'm going to come in light and I suspect my night time temperatures will start giving me problems eventually.  The other wild card is who has a pumpkin in the weeds.  There is probably somebody that isn't talking.  It should be a fun weigh-off.  Happy to see a number of pumpkins over 1,000 pounds, because that hasn't happened over the last 3 years.