This is the Pumpkin Named Gordo Gato 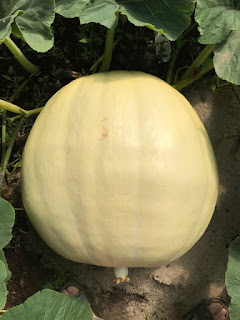 I've named the 1325 pumpkin Gordo Gato, in honor of our cat named Fat Kitty who passed away earlier this year.  Gordo Gato is slugging along right now.  I'm hoping the issue is like last year and that the cold weather has hampered growth and it will decide to kick in late.  Last year's pumpkin at 30 days old was only about 220 pounds.  Which is terrible.  But then it made up ground late.  I'm hoping this one is the same (it is a seed from that same pumpkin).  The issue I have is that last year the pollination was 2 weeks later, so when the pumpkin was ready to start growing it was getting into better weather.  I fear I've burned two weeks of growth in bad weather that I might not be able to make up.  Hopefully this pumpkin decides to be a long grower.
Posted by Jamie at 7/03/2020 11:46:00 AM

Love the optimism! This years weather has been nuts, I personally am struggling to get one of mine to take a pollination. Plants looking good, just not growing pumpkins, hope it stays better and you can get at least 1good n
One