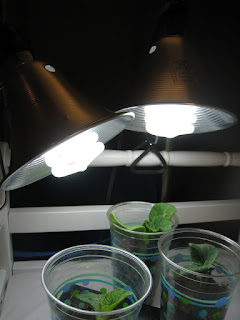 After doing a little research I decided that I could do a very inexpensive grow light setup for my pumpkin seed starting that should work as good as the $80 setups that I've seen in the store and online. The setup consists of two 100 watt, 6500K CFL light bulbs from Wal Mart ($4); two brooders ($10); and the timer plug that we use for Christmas lights (already had it so $0). I screwed in the bulbs into the brooders so I could direct the light to the plants and plug the brooders into my christmas light timer so that the lights would run for 14 hours during the day without me having to remember to turn it on or off. The whole setup was placed on a table in a closet so I could better control the temperature. In the closet I place a thermostatically controlled electric heater that I got at Big Lots ($15) that was run at nights when the lights were off to keep the plants at around 80 degrees. At the base of the planting cups I put a wireless thermometer so I could watch the temerature which stayed at a very consistent 75 degrees. Closer to the bulbs where the plants leaves were located it was about 81 degrees. My test planting proved to be very effective with all of the pumpkin plants coming up and growing nicley.
Posted by Jamie at 3/22/2009 10:13:00 AM

I was trying a single 100W equivalent 6500K (1600 lumens) CFL with the EXACT SAME kind of clamp light (150W max). Not as my main light source (Sun is my main source), but to supplement when it seem like they need the light. I keep mine a little closer than yours (about 2 inches from the top).

The cool thing about our setup, we can put a metal halide bulb in and jack the lumens way up if needed

My setup seems to work just fine. I have the bulb about 3 inches from the plants. I take the plants outside on sunny days and put the plants in a window so they grow accustom to the sunlight but I don't see any difference on how the plants react whether they are in the sun or under the bulbs. The tender seedlings don't not much to get going. I'm sure if they were under the bulbs for more than two weeks you might start seeing a difference but the plants will be out in the patch in hoop houses starting tomorrow.