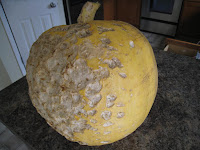 HailBoy, the pumpkin who initially survived a horrific hail storm and tornado died today due to trauma caused by the storm. It grew for 17 days. It put up a good fight, but in the end the hail was just to much. It was an estimated 35 lbs and is now the 35 est. Johnson (1350 Starr x 1566 Rodonis). That weight is almost too embarrassing to print. Not the 1200 Johnson that I was hoping for. There were actually seeds inside and many seemed mature enough to possibly be viable. In a couple of weeks I'll plant 5 seeds and see if anything comes up. 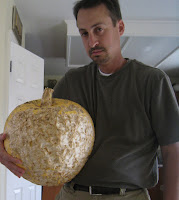 If they are good and you would like some seeds just let me know. Thad Starr was once told not to grow the 227 Leland because the seed came from a very small pumpkin. He then went off and grew a 1,524 pounder off of it. I'm going to go under him by 192 pounds and make the hottest new seed from a 35 pounder. Lol
Thanks to Chris Strickler at CBS Excavating for letting me grow on his property this year!
Posted by Jamie at 7/28/2009 04:59:00 PM

I just about shed a tear when I caught site of you holding Hailboy. I was rooting for him and you all the way. It would have been the comeback of all time. If the seeds are viable I would be honored to grow "son of hailboy" next season.

Oh I forgot to ask are the other vines still showing signs life?

I'll you know how my test plantings go. Hopefully we can get some to grow.

Have you considered cloning the 1350. I read an article the other night about cloning Giant Pumpkin plants, this way you can still use the 1350 for next year.

I know growers who have done clones. Usually you do a clone when you have a plant that produce a really big pumpkin and you want to either grow it again or you want to use it as a pollinator the next season. Since my 1350 hasn't proven its self as a big producer I don't want to go to the trouble of maintaining the plant indoors all winter. I don't have a good setup for that.

So sorry about that. Living in Thornton, we were spared damage from the hail. This weather is so completely weird this year.

Don't give up. Vikki

Thanks Postcards-Pumpkins. There is always next year.

I have been following your post as a Utah gardener growing several varieties of pumpkins...and I really was sick about your pumpkin loss! We had a huge windstorm on Thursday night and while the power pole out front was blowing down into the road, I was in the garden trying to fence up the corn, half of which was already on the ground. Gardens can be so wonderfully frustrating! Pumpkins made it through...except for the big one the deer took several bites out of.

Thanks Kris. I guess some of the pain is what makes the good times so enjoyable. Glad to hear you survived the storm.

I can imagine the pain u are feeling now. I would suggest you to take precautions from next time.


Cash Online Get Easy cash at your door step

So sorry to hear about hail boy, i thought he'd make it

The pumpkin grew for 3-4 days and then stopped. About 4 days later it got soft and started to go down. I think the stress finally caught up to the plant. I then started my patch prep early for next year.