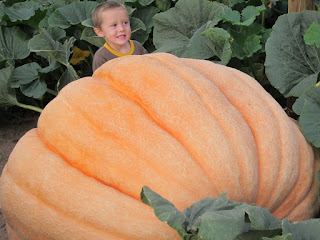 Actually two new milestones today. The pumpkin hit 901 pounds today according the circumference charts (it is actually probably a little under that in reality) and by the measurements it put on a personal best 30 pounds today (although I'm guessing yesterday I probably had an under measurement which inflated today's numbers some) which beat it's previous best of 29 pounds a month ago. This isn't a fast growing pumpkin but it doesn't seem to slow down much.

Growth has been pretty erratic lately. Weather is a factor in that but it is also due to the challenge of measuring a pumpkin that is more than 13 feet around in circumference. Getting the tape on the proper line and not having it slip around is always a difficulty and with time the line changes as new bumps and bulges form. As long as you see growth on the measuring tape it is all good.
Condolences go out to Pete today. His patch got hit by hail. Sounds like it was a pretty good storm but maybe not a devestating storm. Always hate to see that when it happens to a grower and especially one that I know has been working hard this year.
Gave the plants about 1/2 cup of seaweed today. Now that we are getting into the last month of growing I'll start giving the plants a touch of potassium to help keep the pounds going. I use a liquid seaweed that is 0-0-5 and has some humic acid in it.
Posted by Jamie at 8/23/2010 08:42:00 PM

Good job Jamie! I can't wait to see it at the end of Sept. My pumpkin has slowed down its growth quite a bit. It is sitting about 360 right now putting on about 8-10 pounds per day. It is still one heck of a fruit for never having grown anything before. I am starting plans already for getting the soil in better condition for next spring. This year I basically did nothing other than putting the plant in the ground with a couple bags of compost.
Erik

Sorry for the delayed reply. I've been out of town. 360 pounds is great and I'm sure you've learned a lot this year. Growth tends to be slow this time of year but there is still a lot of pounds that can be packed on.