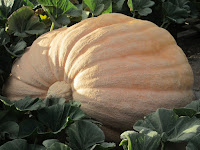 I've mentioned before that the 1161 Rodonis pumpkin is named LarryBoy (Larry for short). Larry was inspired by a child that is about the same age as my son but a whole head taller and at one time almost twice as wide. At about 3 months Larry was nearly 28 pounds. You might understand why I might name a pumpkin Larry. To the right is the picture of the pumpkin and a picture of Larry.
I discovered yesterday that something, probably a vole, has been biting at the 1236 pumpkin. I wiped the area down with bleach and sulfur powder and put some moth balls around the pumpkin to keep it away. Vole will no longer be with us if I find him.
I gave the plants some compost tea this evening with the secret sauce.
Posted by Jamie at 9/06/2010 06:43:00 PM

It's still growing so hopefully it will be even bigger in the next three weeks.