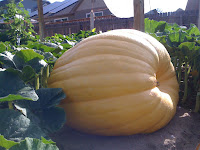 A big thanks to Joe Scherber who watched my plants for me while I was out of town for the last week. Even though I may do a dispute over pumpkins with my wife on national television from time to time, in reality family comes first. Just got back from a great trip to Canada to see my wife's family and then some camping in Waterton and some time in Glacier national park.

The 868 had one concern this evening however. A tiny bit of sap was coming from the blossom end. It was a clear, gel like substance. In that area I wiped it down with a solution of 50% bleach and the put a little sulfur powder on it.

Wow, that pumpkin is getting huge!

I just keep praying that it will keep growing.

Hello I'm new to pumpkin growing I live in the UK and my atlantic Dills are only about apple size at best,we have not had much sun,I'm feeding regular,is there anything I can do to get some growth on these .

Lack of sun (a minimum of 6 hours a day is needed) and/or cooler temperatures can be a problem. Not a whole lot you can do about that. Fertilizing in small doses once a week like you are doing is a good idea. As long as your watering is correct and the soil has what the plant needs then eventually, when the weather gets a little better that pumpkin will take off. For the first 20 days the pumpkin growth is usually slow to moderate. A 15 inch Atlantic Giant pumpkin at 10 days after pollination isn't uncommon. At day 20 however the pumpkins take off and you can almost see the growth each day.