How to Choose the Right Giant Pumpkin Seed

Forest Gump once said, "Life is like a box of chocolates.  You never know what you are going to get inside."  Unfortunately Atlantic Giant pumpkin seeds tend to be kind of the same.  Each seed in a pumpkin is a child.  And just like children in any family they all look different.  Often there tends to be some similar traits among the group but each child are different sizes shapes and may have different coloring.

This last year my big pumpkin weighed 400 pounds more than my smaller pumpkin.  Each plant got the same fertilizer, soil and watering.  The smaller pumpkin just didn't have the genetics to grow.

When you pollinate a pumpkin the pollination doesn't affect how big the pumpkin will grow.  The genetics that are passed only affects the seeds that would be grown the next year.  Knowing the parents of a pumpkin seed can help you guess which seed to grow.  There is a great website called http://tools.pumpkinfanatic.com that allows you to see the family trees and progeny for a given pumpkin seed.  Once you start to become familiar with some of the main seeds (1725 Harp, 1161 Rodonis, 1421 Stelts, 1385 Jutras) you start to see a pattern where most of the big pumpkins came from.  Most of the biggest pumpkins have either a 1068 Wallace, 998 Pukos or 1231 Pukos (which is the reverse cross of the 998) in their genealogy.  I usually try to grow from those lines and particularly from the world record lines from those seeds.   The good news is that there are a lot of seeds out there with those lines in them.

There are some terms you should be familiar with and how they affect the next generation of seeds.  One is Self and the other is Sibb.  A selfed seed is where the pollinator for the pumpkins is itself.  At one time selfed seeds were looked down upon until Christy Harp smarley selfed her world record pumpkin. From that seed the first one-ton pumpkin was grown and a number of giants.  A sibb cross is where a plant from the same seed is crossed together.  A selfed and sibbed seed does not have the same genetics as the parent seed.  I grew a 1775 Starr seed this year.  It was a selfed seed from a 1725 Harp seed.  My pumpkin weighed almost 1,000 pounds less than the parent it came from was a dark orange color (parent was pale orange) but had the exact same shape as the parent.  Some traits from the parent came through in my seed and others did not.

This year I got kind of lucky in two ways.  A local grower (Joe) was able to get a cutting (sometimes called a clone) of the plant that grew the world record the year before.  What they do to get these cuttings is they get a vine on the plant to root in a pot and then keep that cutting of the plant going during the winter in a green house.  Matt DeBacco, who did the clones last year, grew the cutting during the winter and was able to pollinate it with a plant that grew from a seed from the world record pumpkin.  Joe also got a seed from that pumpkin.  That seed was the 220 DeBacco (1725 Harp x 2009 Wallace).  In theory that 220 DeBacco should have a lot of the big growing genetics of the world record.  This season that proved out some with two pumpkins grown from the 220 DeBacco growing over 1,700 pounds. 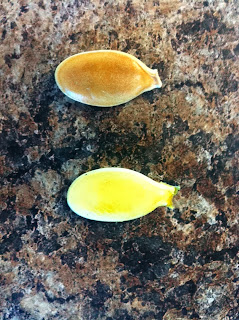 My big pumpkin was pollinated with the 220 DeBacco so it is 1421 Stelts x 220 DeBacco.  When my pumpkin split I decided to pollinate some pumpkins on the 1421 plant with the the cutting/clone (1421 Stelts x 1725 Harp).  I just harvested the seeds from the pumpkins on the 1421 plant. The darker color seed comes from the big pumpkin pollinated with the 220 DeBacco.  The lighter color seed comes from a pumpkin pollinated with the clone (1725 Harp) late in the season.  I found it interesting that although the size and shape of the seeds were the same the coloring was completely different.  Even though the 220 DeBacco is 75% the same genetics as the 1725 Harp world record the differences in genetics is already showing up in the seeds.  This means there will also be differences in the pumpkins and plants.

So far this year seeds that were either from or pollinated by the world record have grown 6 pumpkins over 1,500 pounds.  One was a world record and another was 300 pounds more than the world record but it split so it was disqualified.  The fact that I put the same genetics into my 1421 plant as well as my 1775 Starr plant I hope will prove out the same results for growers next year.

So how to choose the best pumpkin seed?  I would look at the parents and at the progeny of those parents and see how well a particular seed tends to grow if there is data available.  Also look at the shape of the parents and progeny and see what they look like.  Pumpkins with deep ribs and tall pumpkins tend to split more often so you are a little safer trying to grow pumpkins that are long and less ribby.  Try to grow from genetic lines that tend to grow bigger pumpkins.  And then hope and pray you picked the right seed and did everything you could to let it grow a pumpkin that matches its genetic potential.  Good luck next year.  I should have my seeds from this year available in November.