Hopefully We Are Growing Pumpkins Now 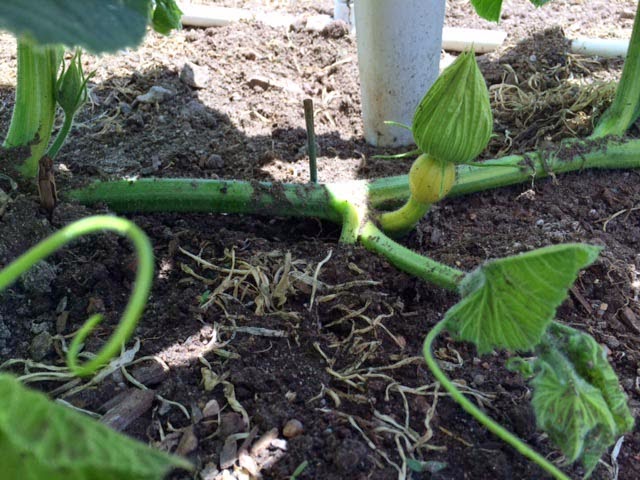 I pollinated the female flower on the 1791 Holland that is at 13' with pollen from a 1305 Werner today.  The 1305 is a very nice looking and aggressive growing plant that reminds me a lot of the 1791.  I know Joe pollinated one at about the same length on his 1305 today so we are off to the races. The female flower was a 4 lobber which is what I prefer.

As you can see in the picture I need to remove the side vine next to the pumpkin.  I'll wait a day or two to see if the pumpkin is growing before I remove that however.

I've had good success with my pollinations taking in the past.  I don't really do anything special.  I lay off nitrogen fertilizers prior and just after pollination.  I also put one of those white lawn chairs over the female flower days prior to the pollination.  I think if you can help keep it cool and relatively dry your changes go up for the pollination taking.  10 days from now I'll know if it worked.  When the pumpkin gets real shiny where you can almost see your reflection in the pumpkin is when you know things are going well.  Usually that is around day 8.

Today I gave both plants some compost tea.  I also gave a foliar application of Nutri-Cal to the 335 plant which is basically a calcium nitrate fertilizer.  The 335 growth has been relatively slow lately, so I'm hoping this will kick it into gear.
Posted by Jamie at 6/20/2014 08:21:00 AM