Had a very nice time with a number of growers at the Wiz's pumpkin patch last night.  A little BBQ and a lot of talk about pumpkins.

Some very nice growth on the pumpkins the last couple of days.  I was beginning to wonder.  At about day 22 after pollination the pumpkins tend to start kicking it into gear some and around day 28-30 they should start cranking it up.  However, not all pumpkins turn up the speed the same way.  Some are more slow and steady but end up huge.  They don't do any big gains on any one day but a whole lot of medium gains.  Other pumpkin rev up really fast and then drop off a little more quickly.  My pumpkin last year was kind of that way.  And then other pumpkins never crank it up and never amount to much.

Saw a nice pumpkin yesterday.  Joe's 282 Scherber.  I'm sure he is working extra hard on that plant just to put in my face, since I pulled my 282.

Today I setup little structures over the pumpkins to help keep them dry.  I basically bent pvc over the pumpkins and then clipped silver tarps on the pvc.  Not completely necessary, but it worked well last year.

The following is the latest pics of the 1791.  I forgot to take a picture of the 335.  Both pumpkins are getting more orange each week.  This evening I did a drench of Xtreme Tea aerated compost tea on both plants that that had a cup of fish & seaweed added to it along with a little Actinovate and Azos that were added at the very, very end of the brew. 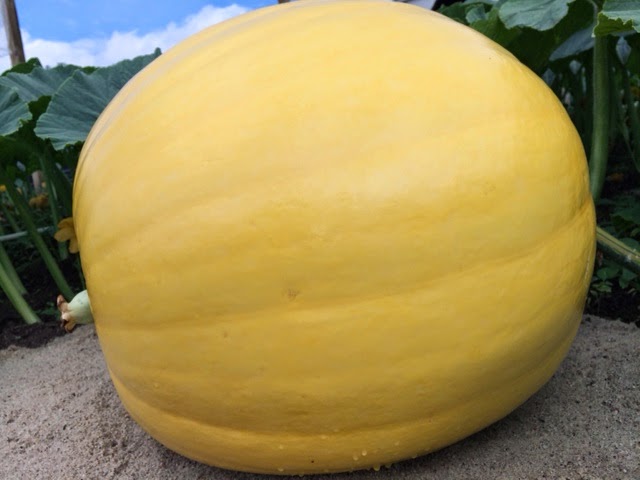 Shortly after my pumpkins are set, around day 14-15 I am experiencing some splitting where the stem meets the main vine (and gelatinous leakage). This has happened on each of the two or three pumpkins I have set on this plant. Any ideas on what might be causing this? I have packed the splits with some sulfur after cleaning. Does this spell doom for my pumpkins?

Check to make. Sure the vine just before and under the stem doesn't have roots that are holding down the vine and causing stress on the stem. That is usually the problem with what you are describing.

Thanks, that makes perfect sense, I cut the roots last evening at the stem, hopefully that does the trick. Thanks!

your pumpkin plants look amazing, im pretty excited with mine, i just pollinated a female about a week ago and shes swelling up nice, i rent and cant compost where i live to make tea or fertilizer do you have any suggestions for fertilizer or nutrients i could buy to use on my plants?