The Right Phosphorous at the Right Time for 20% Greater Roots

I'm trying something different this year.  In the past I've given almost no fertilizers, other than a little liquid seaweed at planting time, for the first five weeks after germination.  A very good grower once gave me that tip and I've stuck with it until this year.  I'm now adding very small doses of specific fertilizers at specific times for specific results.  In addition to liquid seaweed at planting time I've started using a B-vitamin fertilizer.  This helps reduce transplant shock and helps the plant's resistance.  This was proven in a good study in the last few years.

The other thing I've added to the mix is monoammonium phosphate, which I gave to the plants today.  I'm using the RAW brand of phosphorous which is the purest form of momoammonium phosphate you can buy.  It is 9-61-0.  I'm using only between 1/8 to 1/16 of a tsp on each plant.  You don't need much.  This form of phosphorous has been proven in a study to increase root mass by 20% when used in the first three weeks of growth.  Phosphorous is the power source of plant growth and early in the season you want to focus on growing roots.  In about two weeks we are going to change that focus to growing vines, but right now the roots of the plant are what we want to grow the most. 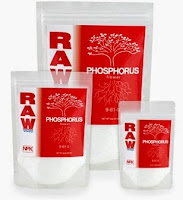 In addition to phosphorous, I added in some fulvic acid and yucca.  Everything was mixed in with some compost tea that I started brewing yesterday.  The fulvic acid is a natural chelator which will help the plant get at nutrients in the soil.  The yucca is a wetting agent that helps water and nutrients penetrate more evenly and deeper into the soil.  Some studies have found greater root mass when yucca is applied to the soil.  Some have suggested that something in the yucca is causing that, but I think what will eventually be found is that water is being spread into the soil more evenly with the yucca being applied so the roots extend into more areas of the soil and the end result is a great root mass.
Posted by Jamie at 5/12/2015 04:53:00 PM