I've been in Canada for the last 8 days with my wife's family having a very nice time, but missing the pumpkins.  Joe was good enough to watch my plants again while I was gone and did some pollinations for me while I was away.  Very grateful for that.  My sister also helped with watering the plants in my absence.  A big thanks to both of them for their help.

The 1985 plant ran wild while I was gone.  Vines have popped up all over the place.  I was expecting that.  After terminating most of the plant, the stump had a lot of new growth popping up prior to my leaving and although I took all of that off before going out of town I knew that plant was looking for places to put all of its stored energy.  I'm hoping it can focus that energy into pumpkin growing and if it does we should be good shape. 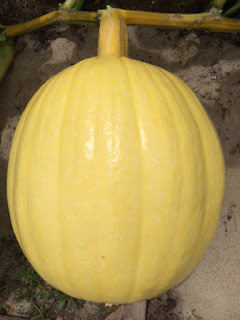 This is the 1985 pumpkin named Ada after my niece.  It is 16 days old now and about about beach ball sized.  I like the look of that stem and the shape of the pumpkin.

The 282 plant will be pollinated tomorrow morning.  A month behind schedule so I'm praying this pollination takes.  Never would have thought we would be this far into the season without a pumpkin on the vine on this plant.  I've got a gut feeling this one could make up for lost time, but we are too far into the season now to see a state record off of this plant.  I plan to pollinate it with my son's1689 Daletas which has a nice pumpkin growing on it.

It probably is okay. Take a look at the ingredients. I'm less familiar with Orchid fertilizers and if there would be anything special for them.