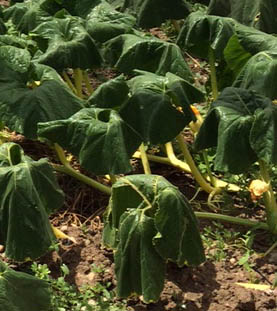 I'm hating myself right now.  There wasn't any obvious signs, but this entire week I just knew in my gut that some thing was wrong.  In terms of growing weather, the weather has been very good all week, but both of my plants just haven't looked right.  Leaves were flagging more than usual on the 282 plant (this plant wilts much easier than the 1985 plant), my kids plants had some burnt leaves near the vine tips and the 1985 plant's leaves just looked a little off to me and growth seemed to be slowing down.  I was starting to wonder if all of the plants had some kind of disease, but there wasn't any real obvious indications as such.  Today I figured it out, but it had to hit me in the face.

Went out to the patch and plants looked like the picture to the left.  That is the 282 plant.  1985 wasn't quite as bad, but both of the kids plants leaves looked like folded umbrellas.  I immediately I turned the water on.  I knew it was either lack of water or the plants were going down from a disease.   It couldn't be anything else.  Within a few minutes I had the answer.  Lack of water.

I have two different irrigation systems.  The first comes on around 5:30 am and waters the plants under the canopy using a Dan Micro water system.  This gives the plants the majority of their water.  The other is an over the head sprinkler system that doesn't really water the plants much, but it mists the plants every 15 minutes to cool the leaves during the heat of the day and keep the humidity up a little.  I'm not sure what is going on, but the under the canopy watering system hasn't been working.  I'm not sure why, but I think this has been happening all week.  I've manually water under the canopy, off the timer this week when I've seen the plants wilt a little but I've assumed that it was going off each morning.  I don't have to do much vine burying these days so I haven't been in the dirt much.  I'm really upset with myself for not watching the water more closely, but I've never had problems with it in the past.

The damage from this probably won't just be lost pounds, but I would guess that deformaties will have formed in the 1985 plant from the lack of water and there will be some damage to the leaves.  I'm lucky the pollination on the 282 hadn't aborted.

The 1985 pumpkin had a circumference measurement that was four inches behind that of my 1421 pumpkin last week on the same number of days after pollination, but it was staying 4 inches behind.  That meant that although it started out a little slower than the 1985 it was keeping pace with it, which was impressive.  Then this week the growth started falling behind.  I wasn't sure if something like a disease that was causing problems or if the 1421 just really took off at this same point.   The answer was neither.  I was dehydrating the plant.

I'm on day 28 for the 1985 pumpkin.  Usually between days 26-30 a pumpkin really takes off in growth.  35-45 pounds a day is not unheard off.  I'm hoping I can get back to if I haven't screwed things up too much.  I've done a very good job this year with my fertilizer program, but you have to keep your eye on the balls for everything and not just one thing for pumpkin growing.

Email ThisBlogThis!Share to TwitterShare to FacebookShare to Pinterest
Labels: watering

What is a good watering schedule then? I might have caused one to abort from lack of water. I don't have fancy watering systems so it's all by hand for me. But I guess I'm asking how much water is to much water? What's to little? I've been watering every other day or two deeply.

Watch the soil to find a good balance. It kind of depends on type of soil, weather, temp, drainage etc... Get a handful and squeeze it into a ball, it should kinda stick but fall apart. Also, check to see how deep the water is getting.

I had someone watering my garden while I was gone for a week and two aborted. I think he was a bit lite on the water. I have two more on board and they are gaining quickly. :)