I've seen this before.  Back in 2013 Denver had its of its worst Mays that I can recall.  I believe there was three days that the sun cracked through the clouds at all that year.  By the end of the month my plants looked a little lime green.  I thought at the time that my season would be dismal.   It turned out that it couldn't be further from the truth.  I grew my biggest pumpkin that year and by the inches was way above state record territory.  Two other growers also had the inches to be state records as well and one turned out to be the new state record.  The lesson was that every growing day is an import day, but maybe May is not an overly import month.

The forecast for the next 10 days looks pretty bad.  Highs in the low 50s with cloudy/rainy weather.  The rain doesn't bother me at all and actually I'm for it.  Since the plants are in hoop houses/greenhouses they don't know when it rains and it is good for the rest of the patch.  The lack of warmth is a mild problem.  I have heat lamps in all of the hoop houses, so we can probably keep the plants at least at 70 degrees during the day and maybe warmer. 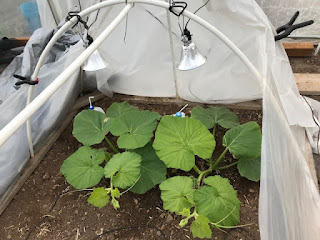 The lack of sun is a bigger problem. In the greenhouse I've hooked up two grow lights over the two plants.  This will give a little supplemental light to the plants and allow me to keep the plants covered for warmth a little longer in the morning.