On Friday, when we cut the pumpkin from the vine we have an annual tradition that started with my very first giant pumpkin of throwing a pumpkin party.  Everyone is invited and brings a favorite pumpkin/fall treat.  I'm told it is a lot of fun, but never have time to socialize as much as I like as I'm taking care of pumpkin stuff (aka bad host).  A big thanks to mom, dad, Tammy and Lisa for all of the big help they are with the party.  They were a tremendous help.

I'm often asked how you move a pumpkin this big.  Thanks to Justin, photographer for National Geographic, that story is told in pictures.  The fork lift I got this year was bigger than ones we've used in the past, which made things a little problematic for getting it into position, but everything worked in the end. 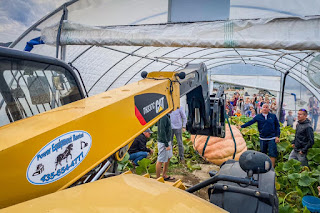 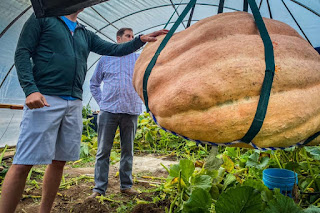 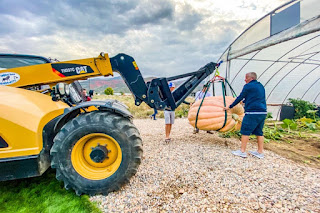 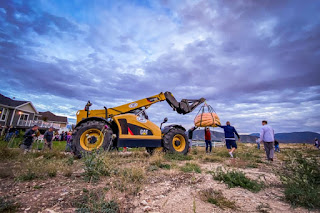 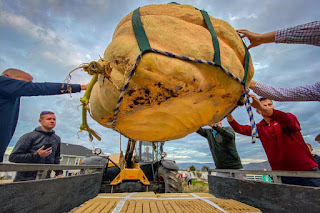 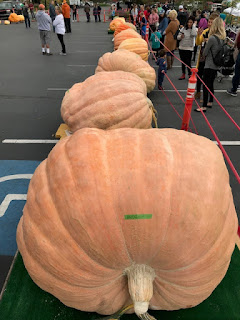 Thanksgiving Point always has a great weigh-off and so many people come together to make it happen.  This year they had about six lifting rings and two forklifts which really made things move along, because they could pre-stage the pumpkins to keep thing moving to the scale.  Great job UGPG!  It is a lot of work to put together an event like that.

I knew of four good sized pumpkins in Utah going into the weigh-off and I had figured 3rd place was reasonable, but you never know what surprise pumpkins could show up.  One pumpkin grower said he was going to go to the Hee Haw weigh-off, so to three seemed possible.  I knew my pumpkin in terms of inches was the smallest of the four.

At the weigh-off I gave my pumpkin (aka Uncle Sam) a few thumps and it seemed more solid than a remembered in the past.  I asked Matt McConkie to thump it and he thought it possibly sounded heavy too.   But I've been fooled by this in the past.  Going into the weigh-off I didn't really consider the chance of the pumpkin going heavy, meaning it weighed more than then the estimated weight from measurements.  Pumpkins in Utah don't typically go heavy, but my first season here both pumpkins went heavy.  My OTT measurements said something around 1,275 pounds.   I had been telling everyone 1,230 because it seemed reasonable and I hopefully thought it would weigh about that much, which would be bigger than my previous personal best of 1,220 pounds.

Of the big ones, Joey's pumpkin went first and unfortunately that pumpkin went light at 1,200 pounds.  He did a great job with that plant and got about as much out of 400sq feet as a grower could get.

Next was my pumpkin: 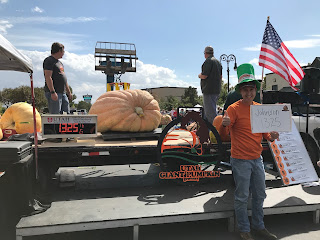 But fortunately, I wasn't the best pumpkin grower in the family.   My son Bode outdid me with a 1st place finish in the children's division.  He really worked hard this year and didn't nearly reach the results he deserved this season.  About five weeks ago his pumpkin stopped growing after only about 35 days of growth.  We were fortunate to be able to get his pumpkin to the scale.  And he topped them all at 299 pounds.  I think if a deer hadn't taken a couple of bites out of his pumpkin we would have gotten to 300.  I look forward to see what he can grow next year. 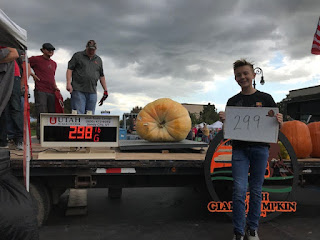