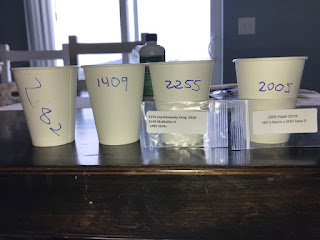 Yea!  The first true day of the pumpkin growing season.  My son and I have started soaking our seeds.  We first started by sanding the edges of the seeds.  The, in some warm water, we added a touch of humic acid and a small drop of liquid seaweed.  Those two things will help the seeds germinate.

We are going to soak the seeds for about 4 1/2 hours and then transfer the seeds to lightly wet paper towels that we will put in zip lock bags.  That will then be placed in a closet with a thermostatically controlled space heater and a heated seedling mat. That should get the seeds to about 85 degrees.  About 80-90 degrees is the target range.  In about 22 to 30 hours the tap root will start coming out of the seed.  At that point I'll put the seeds in a pot that has a soilless growing mix (ProMix BX), mycos, azos, humic acid and Actinovate.  Those pots will be in the same closet with the space heater and has grow lights.

I'll take the plants out for sun from time to time, but the plants will stay in the grow closet for about two weeks.  At which time, I'll plant them in the patches.

My 2019 lineup (hopefully at the end of the season I'll read this post foundly):

The 2003 pollinator was beautiful for its size.  Very orange and shiny.  A little too ribby to be perfect, but I feel in love with that pumpkin and knew I had to grow a seed from it.  But then I discovered the 2005 and thought it had an even better cross.  The fact that it is also a seed from the 4th biggest pumpkin ever grown last year was also a nice bonus.

2255 Zaychkowski (2145 McMullen x 1495 Stelts) - More great 2145 genetics in this seed.  I've known Eddy for a number of years and he has really taken his growing to a new level and has put together a great setup to do it.  But anytime a grower goes from a personal best of around 1,100 pounds and then nearly doubles that best with a one ton pumpkin you have to take notice.  And that pumpkin got damaged and probably had a fair amount of weight to put on the last three weeks.  I have a video post on this blog that shows Eddy's pumpkin

My son is growing the 282 Scherber.  He and I are doing a crazy little project together with it.  The 282 Scherber is clone of the 1725 Harp plant that grew the first one ton pumpkin.  That clone was selfed to produce the 282.  So genetically speaking it is the closest genetically to the world record 1725 plant you can find.  That 1725 plant was crossed with the 1409 Miller and the seeds from that pumpkin (2009 Wallace) produced a number of world record pumpkins and a large number of one ton pumpkins.  Most all of the biggest pumpkins today have 2009 Wallace in their lines.  The funny thing is that nobody ever did another 1725 Harp  x 1409 Miller cross.  It is past its prime now (I was going to do this cross 4 years ago), but if you look at the numbers, the 2009 seed isn't much behind the 2145 McMullen seed in terms of big progeny.   So we are hoping to get these somewhat older seeds to germinate and do that cross this season.

I've put on hold the Pumpkin MythBuster Series for now.  Might do one post tomorrow, but I'll restart it again in the next three weeks.  Need to concentrate on growing right now and the weather isn't being kind to get the last pieces in place.